The gist: Marrow may have been one of the most important sources of animal protein for early humans, since we were smart enough to use stone tools to crack open bones while fiercer animals* who had claws and sharp teeth but lacked thumbs and big brains contented themselves with killing the prey and munching on the meat. The humble, hidden tissue has seen a resurgence in haut-cuisine since Fergus Henderson, proponent of “nose-to-tail” carnivorism (that is, not wasting any bits of the animal we are, after all, killing) began offering it roasted at his restaurant St. JOHN in London, which opened in 1994.

While most of the recipes I found online don’t specify which type of marrow, red or yellow, is best for cooking, it’s the yellow that’s found in the long bones that are usually used in cooking, and for good reason, since the yellow is the marrow that contains all that delicious fat. (But don’t pass on the red, either – that’s in ribs and shoulderbones, which are also quite tasty.) The fatty yellow marrow makes up most of the stroma in a given bone marrow – stroma is all the tissue that isn’t directly involved in hematopoiesis, or the creation of new red blood cells (“poeisis” is a Greek word meaning “making” – “poetry” comes from the same root). Still, yellow marrow contributes to hematopoeisis indirectly, such as by contributing to a favourable environment in which red blood cells can grow. Yellow bone marrow is mainly a storage mechanism for emergency energy (as is much of the rest of the fat in our bodies), but it can also be turned into red marrow when the body needs to quickly produce a lot more red blood cells, like after serious blood loss. All our marrow starts off red when we’re born, but turns yellower as we get older – like so much of the rest of us, it’s just slowly being pervaded with ickiness. 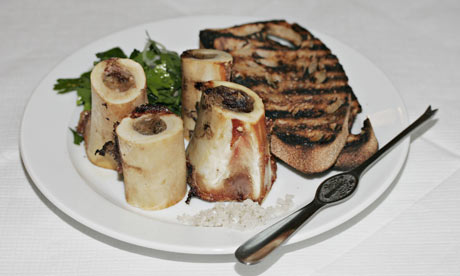 Roasted marrow and toast. Most of the non-table-ready pictures I found were pretty unpleasant, so you can look them up yourself if you’re curious.

The clue: Less straightforward than the previous three clues, but still without any obvious external hints. Knowing about marrow, either through biology or cuisine, would certainly help, but one might also know that fat cells also come in two flavours, white and brown. That might help bring you towards a guess, for example if it were a Daily Double situation, but I’m not sure it would be enough to go on without knowing something else about it, too.

In Jeopardy!: Of course, “fat” is a difficult word to search for in the J!Archive (2948 results), given both its short length and many meanings. “Marrow” is much more manageable, returning only 25 regular clues and two FJ!s (both of which present the word as part of a literary quote, one from Thoreau and the other from MacBeth to Banquo’s ghost). Most of the clues are about medicine or biology, while most of the rest are about cuisine – all of them, unfortunately, vary widely in their correct responses, so not much use can be made of the Archive in this instance. One amusing result of this search, though, is that rapper-cum-actor Ice-T’s real name is Tracy Marrow. So there you are.

* Notably not including hyenas, whose jaws are powerful enough to crush bone, no tools needed.