$800 clue: Grand Duke Leopold I gave this Florence landmark its status as a museum

The gist: Before that, it was just some stuffy old offices. In fact, the Italian word Uffizi is a variant spelling of “uffici,” which literally means “offices.” Construction of the Uffizi complex was begun in 1560 by Grand Duke Cosimo I de’ Medici (those guys tend to turn up a lot in discussions of Italy) as an administrative centre for his bustling metropolis, although it would only be completed in 1581, seven years after his death. Though it was mainly an office building, Cosimo had planned from the get-go to use part of it to house some of his family’s vast art collection, and even during its construction it is said to have been a gathering place for great Renaissance minds like da Vinci and Michelangelo. The buildings continued to house works of art great and small after the Medici line ended with the death of Anna Maria Luisa in 1743. In 1769 (according to the museum’s website), Grand Duke Leopold of the Austrian house of Hapsburg-Lorraine line, in the spirit of his beloved enlightened absolutism, dedicated the Uffizi to the public good. Today, the Uffizi continues to be one of the most popular tourist attractions in Italy (and certainly in Florence). Among its most famous (and among my personal favourite) pieces are Botticelli’s Primavera and the Birth of Venus, Caravaggio’s Medusa, and Parmigianino’s Medusa with the Long Neck. Just don’t go expecting to see Michelangelo’s David; that most-famous Florentine sculpture isn’t in the city’s most famous museum, but nearby at the Galleria dell’Accademia. 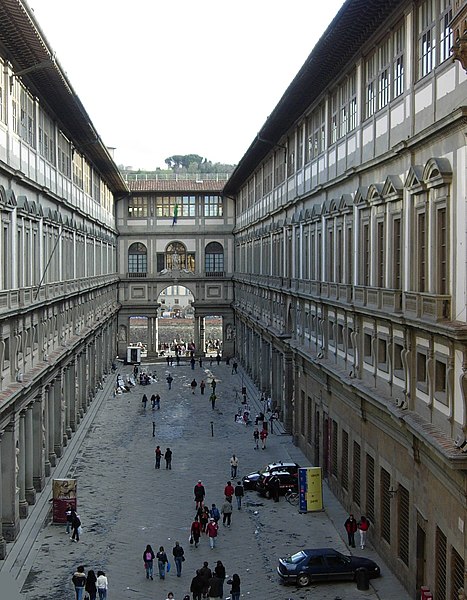 View of the inner courtyard of the Uffizi

The clue: A Florentine museum and landmark? Well, that’s the Uffizi, almost certainly… except that the city has way more museums than that. Still, in the absence of any other obvious hints, the Uffizi is always the go-to.

In Jeopardy!: The Uffizi has fifteen regular clues and one FJ! clue in the J!Archive… plus one tricky one where the correct response was the Pitti Palace, which is actually the largest museum complex in the city, if not the most famous. In any case, unsurprisingly, a full 12 of the regular clues mention Florence. The rest are about artists and work; Botticelli gets two, Caravaggio one, and Nicolas Froment‘s Lazarus another. The FJ! is about Leonardo DiCapiro, whose first name apparently comes from the story that his mother first felt him move while looking at da Vinci’s work hanging in the Uffizi.