$1600 clue: Enjoy Manarola, one of the five towns on Italy’s West Coast collectively known by this name, Italian for “Five Lands”

The gist: Well-known from innumerable travel blog posts about Italy. Cinque Terre is the name by which a collection of five Italian towns – Monterosso al Mare, Vernazza, Corniglia, Riomaggiore, and the clue’s Manarola – on the Ligurian sea (the bit north of Corsica and south of the top left part of the boot). The towns are built into the rugged, steep seaside cliffs that characterize the Ligurian shore, giving them a quaint, rustic beauty, which is compounded by the fact that they are inaccessible to cars and have very little visible corporate development. Trains and boats, as well as cycling and pedestrian paths, connect the towns to one another, which has made Cinque Terre a very popular destination for tourists looking to escape the bustle of the large cities – although with the largest of the towns being having a population of about 1700 people, you might be more likely to run into another tourist than a local. Still, their beauty has been recognized by UNESCO, which made Cinque Terre a World Heritage Site (along with Porto Venere, a nearby town, and the islands of Palmaria, Tino, and Tinetto) in 1997 for its “great scenic and cultural value,” noting in particular that “the disadvantages of a steep, uneven terrain[ encapsulate] the continuous history of human settlement” over the last thousand years and more. 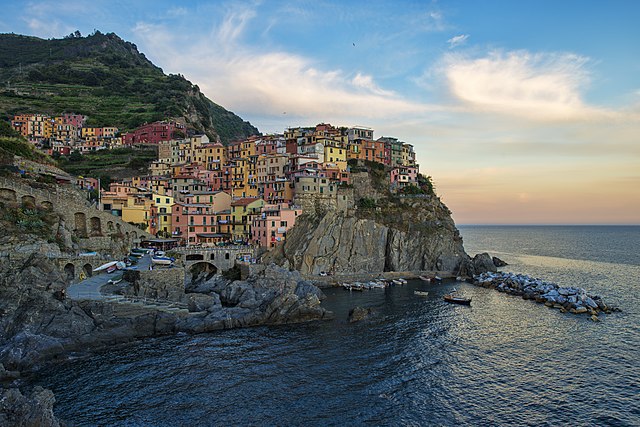 The clue: I don’t think I need to tell you that the key to this clue comes right at the end. Many people have heard of Cinque Terre, but far fewer know the names of the five.

In Jeopardy!: Just two clues for Cinque Terre, and this is the only one where it’s the response. The other mentions it as overlooking the Ligurian Sea, and asks which larger sea that’s a branch of (it’s the Mediterranean, by the way).