$2000 clue: The subatomic weak force acts on these particles named for an Italian-American physicist

The gist:  Sadly, Dirac doesn’t get the same creditFermions, defined (in “simple” terms) as all matter particles that have a half-integer spin and that, therefore, obey the Pauli exclusion principle. They get their name from Enrico Fermi, who, around the same time as his English colleague Paul Dirac, described the very complicated statistical concept today known as Fermi-Dirac statistics (in fact, a less wordy definition of fermion is a particle that is characterized by Fermi-Dirac statistics). The Pauli exclusion principle, you may or may not recall, basically states that identical particles (that is, identical fermions) can’t occupy the same quantum space simultaneously. If you can imagine the structure of the nice, simple helium atom – two protons in the middle with two electrons around them – those two electrons, though sitting in the same valence level, need to have different spins to both stay there. So, one will necessarily have an “up” spin (a spin of 1/2), while the other will have a “down” spin (-1/2). That way, although they’re in the same “shell” of the atom, they’re in different quantum states, and they can co-exist, harmoniously negating the positive charge of the atom’s protons. Add another electron (and another proton to make lithium), and the third will have to occupy the next valence level up, since there are no more available quantum states in the first. The “opposite” of a fermion is a boson, which are all particles that have integer spins, and therefore aren’t bound to the Pauli exclusion principle (please don’t ask me why).

And I must admit, I have no idea what the weak force (one of the four fundamental forces, along with gravity, electromagnetic force, and the strong force) has to do with fermions specifically. I’ve found a reputable-looking source (University College London) that claims that the weak force is the only force that “couples to all the fermions,” but Wikipedia (and some other sources) say that only “left-handed” fermions interact with it. If someone could clear this up (maybe “couples with” and “interacts with” are different things?), I would be ever so grateful. 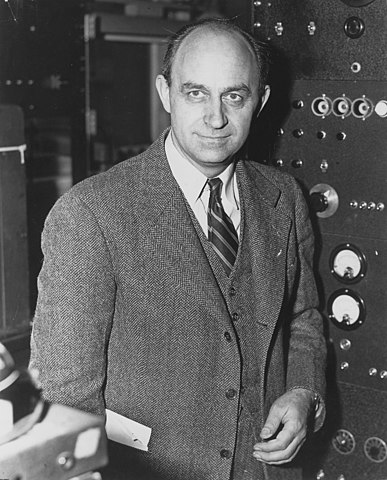 The clue: Clearly you don’t need to know anything about the weak force to get this (and based on my research, I’m not convinced the Jeopardy! writers know anything about it either), because all this clue is asking about is a subatomic particle with an Italian-esque name. You would have to know that “fermion” comes from someone’s name, and not from some weird Graeco-Latin root, however.

In Jeopardy!: This is just the humble fermion’s second clue in the J!Archive, the first being from five years ago and also essentially asking for a particle named for an Italian physicist. It, however, contrasts fermions with bosons, as opposed to spouting some potential nonsense about the weak force.