A slight format change today: I’m going to start hiding the correct response in a spoiler box – just click on it to expand and reveal. This is just going to make it a lot easier for me if and when I decide to change the colour scheme around here.

Correct response
BOB CRATCHIT
The gist: Dickens, with his prolific output, numerous adaptations, and plain old 19th century charm, is a perennial Jeopardy! favourite. A Christmas Carol often turns up around the Holiday season, but it’s far from unheard of at other times, too. The story tells of miserly old Ebenezer Scrooge and the things he sees while taking a tour through alternate realities by a menagerie of ghosts (or that’s how I choose to interpret it, at least). In Scrooge’s cruel, stereotypically-19th century employ is Bob Cratchit, an economically miserable but emotionally rich scribe, who sits in Scrooge’s anteroom copying letters and shivering under a blanket in lieu of the fire that his boss refuses to keep stoked. It’s Cratchit’s son Tiny Tim, that indomitable symbol of spirit, pluck, and youthful courage, that ultimately de-ices Scrooge’s frozen heart and transforms the man into the kind, loving, charitable figure he becomes by the end of the book. In particular, the vision of Cratchit mourning his dead son given to Scrooge by the Ghost of Christmas Yet to Come brings about the profound change of heart that results in a fat Christmas turkey and a raise for the Cratchit family, not to mention a newfound outlook on life and the poot on the part of Scrooge. Kermit the Frog (voiced by Steve Whitmire, who took over Kermit’s poles on Jim Henson’s death in 1990) portrays Cratchit in The Muppet Christmas Carol. 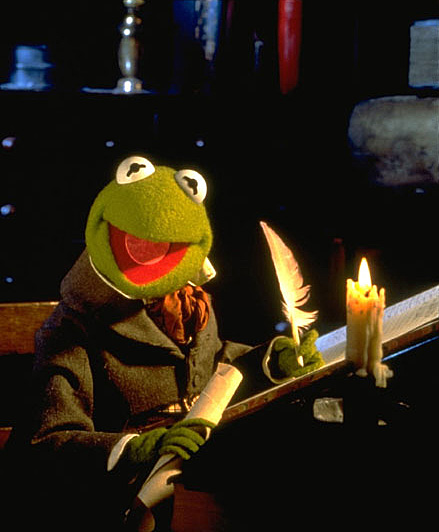 Bob Cratchit (Kermit the Frog) copying letters in his overcoat

The clue: If you know the basics of the story, Cratchit is really the only possible response. Jacob Marley also arguably worked “for” Scrooge in that they were business partners before the former’s death (and subsequent afterlife wandering the Earth in remorse for his greed), but he was certainly not Tiny Tim’s father – you can be assured that if the correct response was Marley, there’d be some mention of his death or ghostliness. Just like the $200 clue, this one is just a straightforward character description of a fairly well-known story. If you don’t know anything about A Christmas Carol, there’s no way to figure this one out, unfortunately. Study up on your Dickens plot summaries.

In Jeopardy!: Cratchit (including his wife and son) shows up in 16 clues in the J!Archive, only a couple fewer than yesterday’s Simon LeGree. Hard to tell how often A Christmas Carol shows up, since searching its title of course also turns up questions about Christmas carols in general, of which there are many, but again, Dickens is an important author to know about, and as one of his better-known works, A Christmas Carol is definitely one to remember.